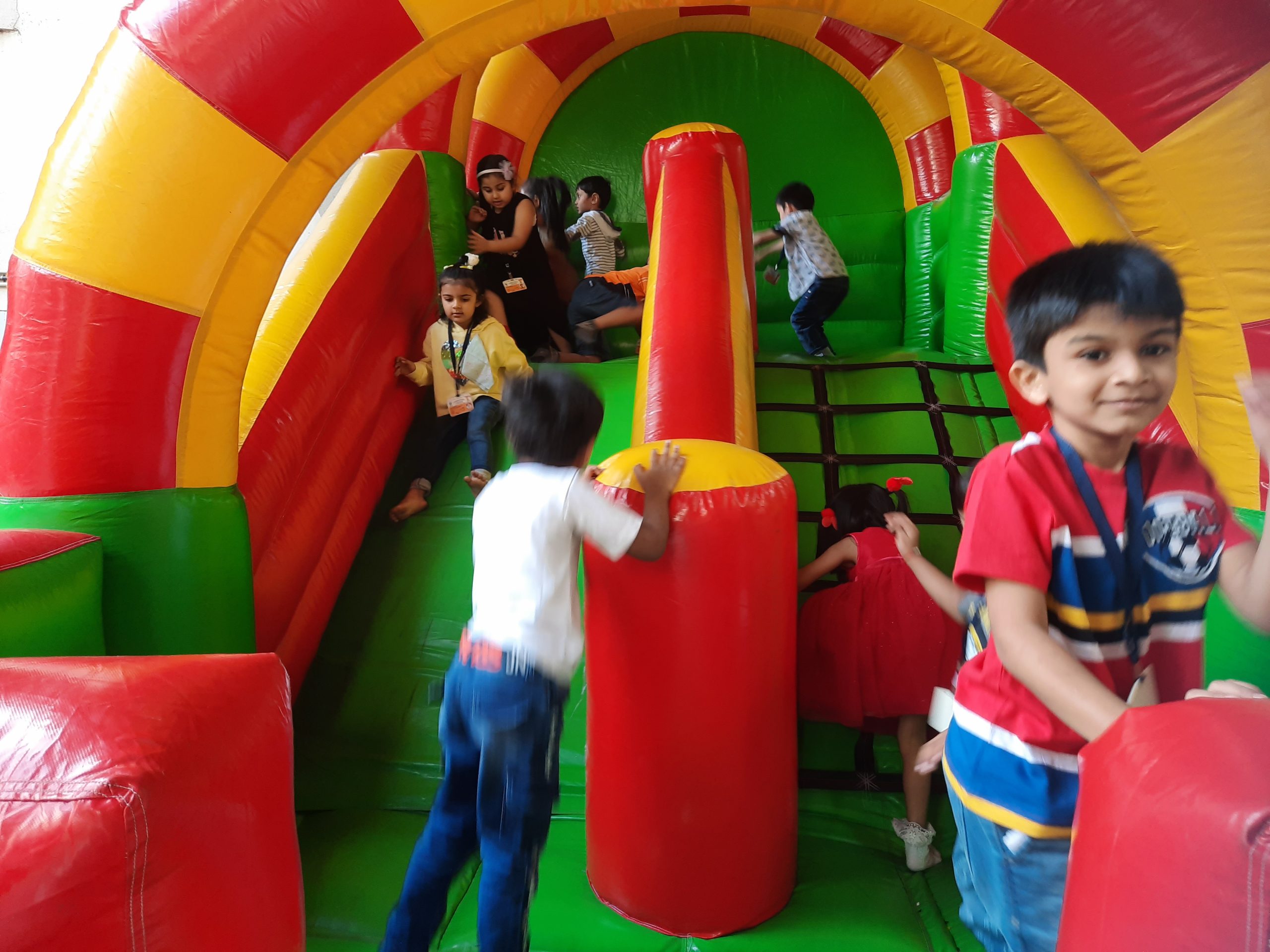 A country’s greatest wealth is its children.  Chacha Nehru rightly said, “The children of today will make the India of tomorrow.” And, to commemorate the birth anniversary of India’s first Prime Minister, Pandit Jawaharlal Nehru, the nation celebrates Children’s Day on 14th November every year with great pomp and raises awareness on children’s education and their rights. This year, on the occasion of Children’s Day, Jasudben ML school and Bloomingdales Pre-Primary came together and planned various fun-filled activities for the students with a special “no books” day added to the list.

Students from Pre-Primary to class VII attended the school in civilian clothes of their choice, skipping their uniforms for the day. With several engaging, entertaining and joyous activities planned days ahead, the school was successful in making the day a memorable one for the students.

The Pre-Primary section was seen enjoying a train ride and a wonderful bouncy castle was also set up for these little ones. A popular children’s folktale from, Aesop’s fable, ‘The Lion and the mouse’ was enacted by the teachers through a shadow puppet show. Apart from that, nursery children too were found engrossed in playing fun games, dancing their hearts out and enjoying the rides, and they were also given a medal as a takeaway.

Playschool children also received some temporary tattoos that were drawn by the teachers. The teachers also shared some stories about Chacha Nehru with the children. The students even got a shaker toy made by the teachers out of paper cups that the students themselves had previously painted, as a takeaway gift.

The teachers of the primary section performed a spectacular dance performance where they danced to the songs that the students have been dancing to in school, which brought a smile to the faces of those little ones. To express their excitement, the students even stood up and danced along with the teachers to the steps they were taught earlier. Students were also shown movies in their classrooms which they enjoyed thoroughly and later chocolate muffins were handed out to them.

As for the secondary section students, starting from classes 5 to 10, they were seen playing a few interesting games and watching popular movies suitable for young and adventurous minds. Movies like Baby’s Day Out were screened for the primary section, while Coco, Soul, Home Alone, and some other new films released this month, like Enola Holmes 2, and so on were shown to the students of higher classes. The teachers also prepared a bulletin board right outside their classrooms holding up a chart with the topic, “It’s cool to be a kid: Tell us why?”. Students gathered around and expressed their beautiful thoughts and feelings on this by writing on the chart. As a token of love from the teachers, all the students received a chocolate chip brownie.

Moreover, students of the 11th and 12th grades were told they would be having their English test that morning.. Imagine their surprise when they were told to board a bus that would take them to Movietime Suburbia instead. . Their happiness knew no bounds when they found out that they were about to watch one of the newly released Marvel movies, Black Panther 2 – a perfect film for the students on Children’s Day.

By celebrating crucial occasions and dates in the calendar, JML School and Bloomingdales Pre-Primary strive to contribute to an all-around holistic development and growth of their students beyond the classroom walls, invigorating them to become better citizens of the world.

Looking for Something?
Admission 2023-24 Open